Today Rubber Chicken Apps is pleased to announce the release of Lowercase Keyboard for iPad that can be used in any iPad app as an alternative to the standard iPad keyboard.  Lowercase Keyboard is designed for students who are starting on their learning journey in reading and writing.  Often younger learners find it difficult to match their letter knowledge, which normally begins with lowercase letters, to the uppercase glyphs on the default iOS keyboard.

Lowercase Keyboard alleviates this problem with a keyboard that is similar in layout and design to the default iPad keyboard.  Learning features of Lowercase Keyboard include lower and uppercase letters that change as the user presses the shift or caps lock key, a simplified set of mathematical and web symbols, black keys with white glyphs for increased contrast and the OpenDyslexic font available from http://opendyslexic.org.

With a colour scheme that complements the default iPad keyboard, Lowercase Keyboard aims to assist the user without dsitracting from the apps the user is engaged with.  Black keys and white glyphs draws the learners eyes to the characters, enabling them to select the correct letter, number or symbol quickly and accurately.

Lowercase Keyboard follows a strict privacy policy and does not have access to online resources or to the containing app.  This means that it is unable to collect any user data.

Rubber Chicken Apps designer and developer Matthew Thomas, who is also a Primary School teacher, explains “I started creating Lowercase Keyboard for my own Year Two and Three students (6-7 year olds), many of whom struggled to find the correct keys on an uppercase keyboard.  With the ability to install custom keyboards in iOS 8, Lowercase Keyboard became feasible for iPad.

Lowercase Keyboard is currently only available for iPad, but will be developed as a Universal app, available also for iPhone and iPod Touch devices in the future.

* Compatible with iPad and iPadMini

Rubber Chicken Apps is a small iOS development brand by Matthew Thomas, a Primary School teacher IT Integration Learning Leader and Apple Distinguisehd Educator in Tauranga, New Zealand.  Matthew started creating apps for his own classroom, with friends and fellow teachers soon asking if they could use the apps created with their own students.

Rubber Chicken Apps has a range of educational apps available on the iTunes App Store, all with a focus on enabling students to engage with learning concepts and tools in an open ended and enjoyable way, and giving teachers unqiue and powerful tools for their role as leaders of learning. 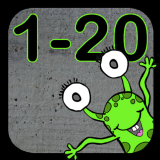 Numbers 1-20 is a counting board that can be used for lots of different counting and number activities. Tap on a number to change the color, from black to red to white.

Tap on the colored circles on the left hand side to change the colours of all of the numbers. Drag the counters up from the bottom of the screen to hide or highlight numbers.

This is a great, open ended educational activity for children who are becoming more confident with numbers. 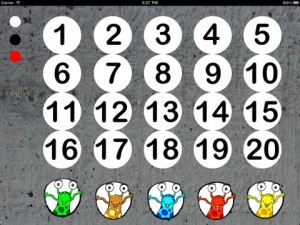 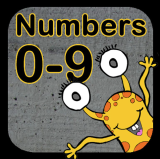 This is a simple app for playing with numbers. This app is great for children to use by themselves or as part of a small group, to order numbers, work out number sequences or number problems, or to work as part of a group with an adult, answering questions through the “Numbers0-9” app. 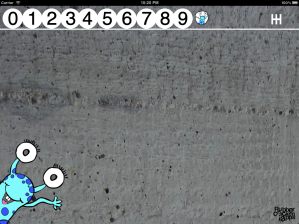 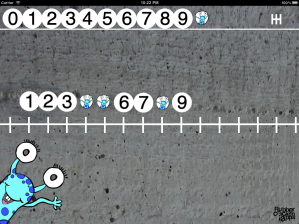 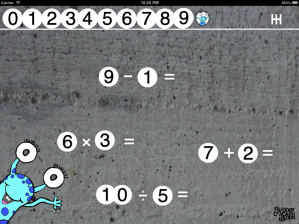 Also included is a handy number line, which is great for ordering numbers. Fantastic at home or at school, this is a great addition to a basic maths app collection! 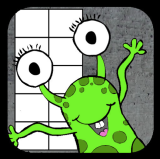 A tens frame is a simple yet very effective tool for playing with numbers up to five and ten. This app provides a tens frame and twenty counters, ten blue and ten orange. The ‘tens frame’ is able to be hidden as well, leaving a space for manipulating counters by themselves.

How could my child use a tens frame? Here are some ideas!

Check that the student can recognise the number of dots on a tens frame card instantly without counting.

Addition:
Make sure the students understands that the dots plus the spaces equal ten. Practise all the combinations that make ten.

Subtraction:
Place all ten dots on the frame and ask the students to imagine taking off some dots. For example, for ten minus six the students imagine six dots removed and see that there are four dots left. Check this by actually removing six dots. This leaves four dots exposed. 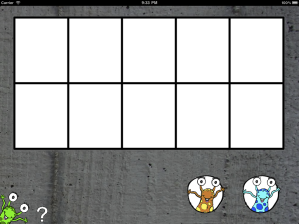 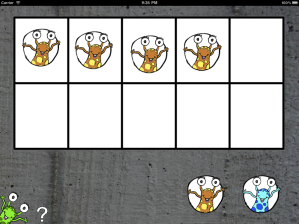 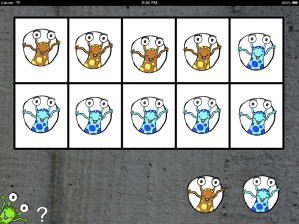 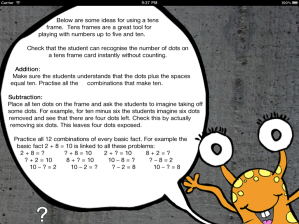 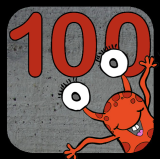 “I love, love, love 100s Board. My child has cp, and he has to learn to do math in head because he cannot write on his own…..yet! We use the 100s Board almost daily, and it is always on my list of top 5 apps. He does addition, subtraction, counting coins, even time, as well as the regular things you’d do on a 100s board . . .

. . . It has truly been life-changing for my son as far as math is concerned.”

The 100’s Board app is exactly that! A digital 100’s board that can show and hide all of the numbers to 100. Numbers can be pressed to change from black to red. All numbers can be hidden or shown at the same time, or in rows / columns of ten. Ten draggable counters are also included for even more fun and games!

This is a great educational K-12 app for helping children with their mathematics, making sense of numbers to 100. 100’s Board can be used for counting in 1’s, 2’s, 5’s and 10’s or can be used for any number of math games such as ‘squeeze’ or ‘guess my number’.

Great in the classroom, at home, or on the move! Here’s a review of the 100s Board app from Stuart Charles –>;;

Staple : 100s Board
I like the bit where he says, “I think it’ll be one of those staple apps that should be on every student’s iPad.”

And a review from some children at Yokohama International School –>;;
http://blogs.yis.ac.jp/cowdyt/2012/03/03/the-children-review-a-100s-square-ipad-app/ 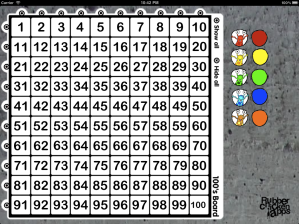 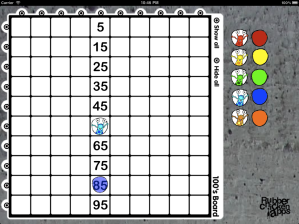 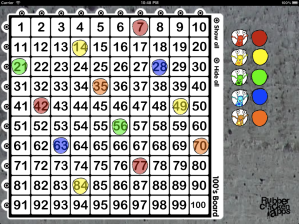 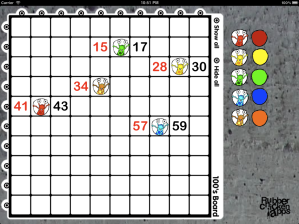 Reviews from the App Store
“This app is perfect for using in the classroom and for helping children with math. I would recommend it for everyone with children.”

“100s board – Versatile tool to work on counting, identifying missing numbers and developer is quick to respond to emails. Kdg teacher”

“Fine, very basic – My 6 year old enjoys the colorful place holders, but the description of this app did not clearly state that it is a digital manipulative, NOT a tutoring game. I might also suggest to the developers that a number chart should begin with 0 (this chart is useless for teaching math concepts through a number line).”

Number Find is an app designed to help children practice quickly identifying numbers when they are amongst other numbers. Children tap on numbers and need to find all ten to move on. This is a great activity to help quick recall of number identification. 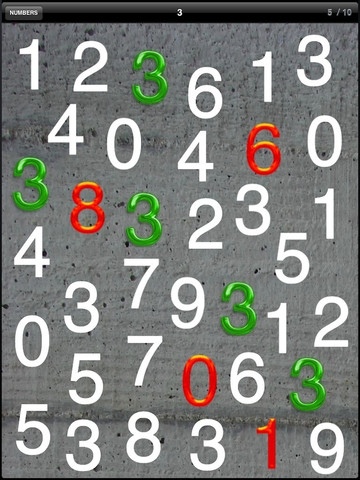 Letter Find is an app designed to help children practice quickly identifying letters when they are amongst other letters. Children tap on letters and need to find all ten to move on. This is an activity used by Reading Recovery teachers to help quick recall of letter identification. 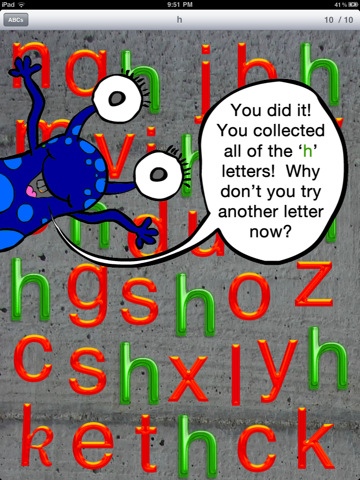 Reviews from the App Store
“A great app for learning letters in isolation. It has helped my 4 year old son to learn unknown letters and consolidate the ones he already knew. A fun learning game that the kids keep re visiting, so well worth it. The simple green for correct and red for incorrect are a clear visual. As a Primary teacher I have used this app in the classroom with great success as well, it is one that children can experience and learn with independently. Thanks”

“So simple, yet so great to use with students – they love it! Great to reinforce letters and to practice differentiating between them. Great app – thanks :)”

“A must have simple yet educational little App. Kids just love it and teachers see how it can support and enhance their literacy programmes. I love it and cross fingers that a ‘Number Find’ might follow?” 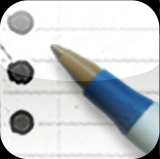 RR is an easy way for teachers to check the results for a running record test of reading. Simply enter the number of words read, number of errors and the number of self corrections.

RR will then feedback to you the error rate, percentage rate, self correction rate, and whether the text read is ‘easy’, ‘instructional’ or ‘hard’.

Great for all classroom teachers who use Running Records to monitor student reading processes and achievement! 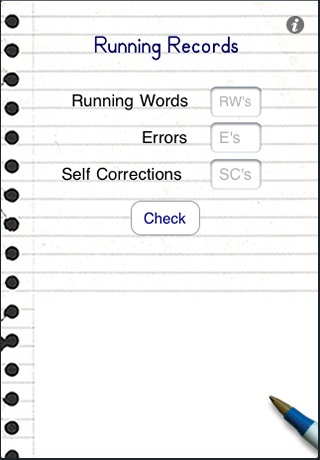 Running Recs is an easy way for teachers to check the results for a running record test of reading. Simply enter the number of words read, number of errors and the number of self corrections.

Running Recs will then feedback to you the error rate, percentage rate, self correction rate, and whether the text read is ‘easy’, ‘instructional’ or ‘hard’.

Great for all classroom teachers who use Running Records to monitor student reading processes and achievement! 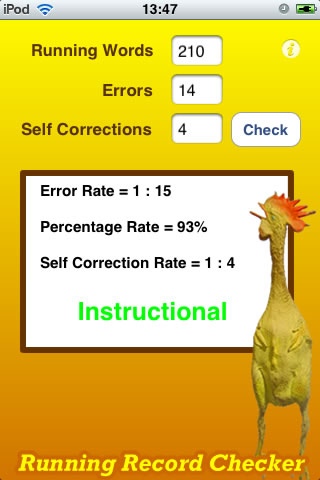